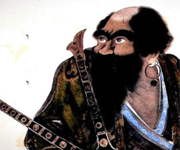 “This is a documentary about the Ainu people of Japan. On a trip which took us from Japan to Europe, we found a people erased from history books. The repeated sentence ‘I am Ainu’ expresses a willingness to overcome their marginal circumstances. But the awakening of the Ainu people faces the mercantilist logic of a global world. Unavoidably, doubt comes to mind: What does being Ainu mean today?”

ISA – AMCE Ethnographic Film Series is a series of events organized by the Institute for Social Anthropology in association with the Anthropology of the Middle East and Central Eurasia Network of EASA, supported by Ethnocineca.